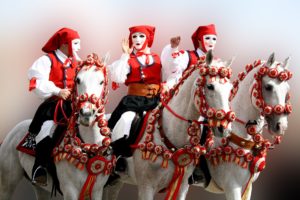 Longing to come to Sardinia for the Sartiglia? A little bit of history. Medieval Europe of the crusades is the cradle  of equestrian tournaments of chivalry and horseback military training games. During the fifteenth and sixteenth centuries such events flourish in the form of big shows offered to the people. Even the Sartiglia of Oristano, as it has come to this day, is to be considered as a public spectacle, organized to entertain and amuse the spectators. The old continent during the sixteenth century shows special attention to the equestrian events, and in particular for racing ring. Kings, viceroys, landowners and trade corporations offered such shows to the public on the occasion of carrying out the appropriation of King fillers or bishops, of births of heirs to the throne or special celebrations of the liturgical calendar, directly involving the noble classes and relegating the people to spectator status. Even the historical event of Oristano part of a broad racing ring. Even today throughout Italy there are several races of riders skills that in some cases try their luck trying to pick a ring with a lance while in other types of rides are engaged in hitting a target represented by a silhouette or cheesecloth, which reproduces the opposing knight against which people once clashed in a duel like the quintana of Foligno or the stroke of the Saracino Arezzo.I oldest documents regarding the history of the Sartiglia of Oristano, held in the Archive historical town, are located in a register of consiglieria dated 1547-48, which speaks of a Sortilla organized in honor of Emperor Charles V probably in 1546. Other documents, later, report the purchase, by the town of time in the workshop of a master carpenter, the stalks to be used for the race. This particular suggests that probably in Spanish age, the race was originally organized by the municipal institution, and subsequently entrusted to the Guilds, the trade associations operating in the Royal City in the sixteenth century, that have perpetuated the ceremonial until today. Are currently no known documents that testify to the race in the Middle Ages but frequent reports of Oristano with Italy’s reigning lords of Commons of the thirteenth and fourteenth century, not that long stays of our judges in the big cities of Spain in the middle ages medieval, lead us to assume that the sovereign of Arborea knew well the military exercise games, and in the capital of Arborea, as well as in the big cities of Europe of the time, nobles and knights sought to prove themselves with the sword and the spear in tests of skill and horse training. 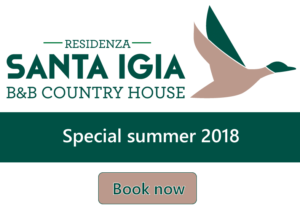